9th June-Friday: Back to Frisco, reasonable weather, gradually improving. Uneventful.  Back at Midway around 14:00, the car returned to the rental at 3:00 p.m. Shopping at Safeway, enjoying our considerable saving on booze and luxury products like olives and French cheese.  Again: pasta for dinner. We finally manage to get the t.v. running (earlier we were unable to manage the sound) and enjoy Seinfield. 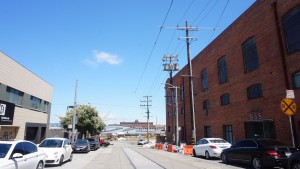 Lots of fancy café’s, galleries and so on but also a place where you can get cannabis on presciption which is called -why o why- ‘Dutchman’s Flat’! 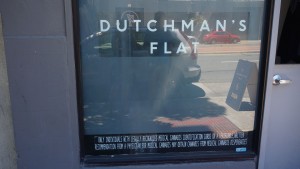 As a whole, the Dog Patch is in the lift. It reminds us of the Kop van Zuid in Rotterdam. Very worthwhile. By foot to the neighbouring Mission quarter.  The Mission Dolores is the oldest building in the city, now closely linked to the Dolores Roman Catholic basilica: grotesque, just like the cathedral at Washington square (where they were collecting funds for Caritas).

In a side street from the famous Mission street we find a terrace where we can enjoy sunshine, beer and dim-sum. 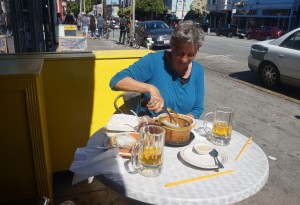 The neighbouring Dolores Park is our final destination in this part of town: loads of people seem to be on their way to this park and we expect to find a concert or other happening. But no: every-one creates his/her own leisure here, just like in the Vondelpark.  Very busy with people picnicking, partying, gaming, or simply smoking pot (lots!).

And a pleasant surprise: we can take the J streetcar back. A couple from Quebec tells us they have come to attend the “Escape from Alcatraz” triathlon the next day.  This is interesting news to us, especially Frits. Unfortunately, the streetcar stops halfway Marketstreet because of problems further the down the line and we end up taking our usual bus.

11th June-Sunday: Frits is off to the seaside watching the Escape from Alcatraz triathlon, starting with a swim from Alcatraz (cancelled because of the strong winds), continues with a 20 mile biking tour (very hilly) and ends with an 8 mile run.

Albertien does the administration and enjoys a relaxed morning.  In the afternoon we take the streetcar to Jackson Street to play pool in a trendy café.  Alas, the cocktail is a disappointment and the pub really doesn’t invite amateurs like us to exhibit our pool skills. The second choice, a somewhat sleazy route 101 bar suits our purposes much better; enjpoying beer (Frits) and wine (Albertien), Frits beats Albertien 3:1

12th June-Monday: In the morning we visit the Museum of Modern Art (MoMA) of San Francisco.  A magnificent building with an interesting art collection including paintings by Andy Warhol and Willem de Koning.

The exhibition on the Munch we saw announced will start only next week. Too bad. It would be interesting to see if and if yes how a link would be made between Munch and van Gogh, as was the case last year in Amsterdam.

After a light but tasty lunch in the museum Frits returns home and Albertien goes shopping at Macy’s. Due to tram delays Frits arrives half an hour late in the Vietnamese restaurant where we are having dinner.  Because Albertien was half an hour early she has the best of the “tiki” hour, happy hour with cocktails (pina collada!) and snacks at half price.  The menu is an unusual mix of a limited number of Chinese, Vietnamese, Thai and Laotian dishes.

13th June-Tusday: After a long skype with Do we take the ferry from the Bay area to Sausalito.  The favourite trip is by bike across the Golden Gate Bridge and back by ferry to the Bay area.  From the bridge toward Sausalito is 5 km downhill.  The opposite journey is therefore much less popular.  We have a quiet and pleasant journey, the weather is beautiful. In Sausalito we admire the main street, enjoying our first ice cream this holiday.

The winding road up-hill is doable in terms of other traffic. Beautiful views and we take many pictures.

Once we have crossed the Golden Gate bridge we decide to walk all the way home.

A wise decision: the hike is first several miles along the Bay and marina, later through Fort Mason Parc, once the HQ of the Pacific troops of the US army, now a recreational area with lots of runners and other sportly types.

The 12 km walk bring us back home at around six p.m. The dinner of meatballs, potato salad and spinach with courgette tastes excellent.

14th June-Wednesday: Frits has spotted the announcement of an exhibition on “50 years summer of love”-not the one in the Young which is advertised for at every other street corner.   After some internet searching we discover that there is such an exhibition at the San Francisco Historical Society, located nearby the MoMa. Very interesting and instructive, lots of contextual information, interviews, movies, video’s.  We learn that the summer of love was much more than flower power: serious student rebellion and proposals for alternative models for living and governance.  The movement of the diggers (type of Oranje Vrijstaat), huge demonstrations etc.  We take the tram all the way to Ocean Beach.  After coffee in front of the zoo, (the final destination of the tram) we take a beautiful road along the ocean for about 3 km toward the Golden Gate Park. 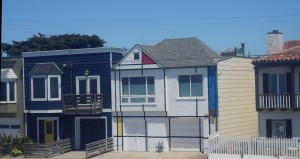 The houses along this road are fantastic -including Mondriaan type of house, English county mansion type of houses etc.  Just before the park we have lunch at a deli full of colourful locals. One of the ladies, who frequents the Netherlands (last year: Den Bosch, the exhibition of Jeroen Bosch) tells us that on Fridays the whole neighbourhood gathers here for happy hour.  We cross the Golden Gate Park, another 3-4 km.

In the sun at a waterside / canoe place we relax in the sun and update our diary; we decide it is too late to go to the exhibition in the Young, our original plan.

We only pass by hoping to score some information, but nothing is available any more.  The bus takes us home to a self-cooked meal and Seinfeld.

15th June-Thursday: First to the Coit tower.  The line is much shorter. While we wait we have time to admire the beautiful murals.  A rickety elevator is able to carry about 8 people. The guard tells us with some pride that the apartment he lives in boosts a similar elevator. 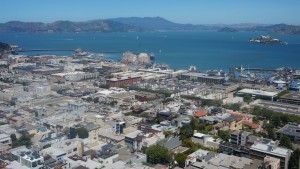 The view is spectacular indeed: the Bay, Alcatraz, the bridges and of course various neighbourhoods including our own. We take pictures of our house. Downhill to the tram to the Young. The exhibition is a disappointment. Much less interesting that the one at the Historical Society.  Little context and explanation, a focus on cultural characteristics: posters, music, clothing, pictures etc. A lot more of the same. 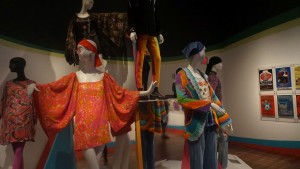 Efforts to make us, the public, relive the sixties (which several parents and their teenage/adult children do indeed). In a psychedelic room we listen to Jefferson Airplane, Janis Joplin and the Grateful Dead, lying on beanbags.  After a healthy lunch of humus sandwiches, we are back home in no time at all. In the evening, we have a dinner at a fish restaurant at Pier 39 recommended by the tourist office because of its durable catch. Frits has trout, Albertien her favourite shrimps (combo).

16th June-Friday: Frits goes running at the Marina Green. Later our trip to Alcatraz turns out to be another Bay cruise you are automatically directed to when Alcatraz trips are sold out. Because of the beautiful weather and the different route this (red-white) cruise is much more interesting than the first one (blue-white).

The latter is part of the city pass package, so perhaps less need to provide quality? Later we visit old World War 2 navy ships and see one of the few surviving submarines.

The death toll was immense: one out of three submarines was hit and the crew perished in the process. We enjoy a final happy hour drink at our roof terrace.